The Pearl of the Mediterranean


Situated on the Mediterranean coast of North Africa, Alexandria is Egypt's second-most populous city. Now a major economic regional hub and industrial center thanks to its location and its easy access to oil and gas due to pipelines connecting the city to Suez and the Red Sea (Egypt's main source of energy resources), Alexandria has a long and glorious history as an ancient center of literature and education.

Alexandria is named after the world-famous Ancient Greek monarch and conqueror Alexander the Great, who is believed to have founded the city in 332 BCE during his conquest of North Africa. 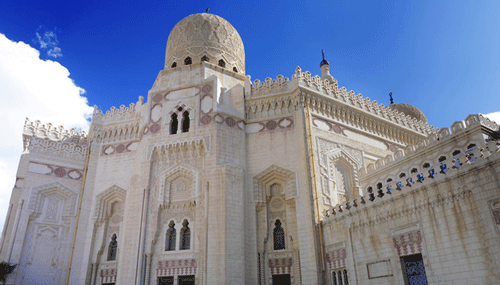 A Brief History of Alexandria

Situated on the eastern side of the northerly tip of Pharos Island, which lies at the mouth of Alexandria's Eastern harbor, the Citadel of Qaitbay is one of the finest surviving examples of the Mamluk Empire's defensive fortresses constructed in the 15th century.

Built in 1477 by Sultan Al-Ashraf Sayf al-Din Qa'it Bay, the fortress stands on the exact site of the famous Lighthouse of Alexandria, which was one of the Seven Wonders of the Ancient World, and whose ruins were used as part of the material to build the fortress.

The citadel was extensively renovated during the rule of Muhammad Ali Pasha in the first half of the 19th century, before being damaged by the British navy during the Orabi Revolt of 1882. The building was restored to its former glory in the 1980s by the Egyptian Antiquities Organization, who turned the building into a Maritime Museum.

Many visitors to Alexandria are drawn by the opportunity to view the remains of the Serapeum, an ancient Greek temple built during the reign of Ptolemy III Euergetes (246-222 BCE).

Although most evidence of the temple no longer stands above ground, after the Serapeum was thought to have been destroyed by Christians in 391 CE who disapproved of its history as a site for the worship of Greek gods, excavations have uncovered an extensive series of catacombs or tunnels underneath the former site of the temple.

The Serapeum is also the site of Pompey's Pillar, one of the largest ancient Roman columns ever constructed outside of the ancient capitals of Rome and Constantinople at 88 feet (26.8 meters). Although mistakenly named after the Roman General Pompey, the pillar was in fact constructed to commemorate the victory of the Roman Emperor Diocletian over revolting Alexandrians in 297 CE.

At the heart of the beautiful Montaza Royal Gardens stands the Al-Haramlik Palace, commonly known as the Montaza Palace, one of Alexandria's most beautiful and historic landmarks. Built in 1892 by the Khedive (viceroy or ruler under the Ottoman Empire) Abbas II, the palace was constructed for use as a hunting lodge and secondary residence of the Khedivate of Egypt and Sudan.

Built using a combination of Ottoman and Florentine architectural styles, the palace's main tower is decorated with elaborate Italian Renaissance flourishes. Surrounding the palace are a number of exclusive luxury cabins, built by wealthy Egyptians and foreigners during the time of the Egyptian monarchy to stay close to the palace.

This impressive library and cultural center on the shore of the Mediterranean is both a commemoration of the ancient Library of Alexandria that was destroyed during the classical period and an attempt to reinvigorate Alexandria's worldwide reputation as a center of learning.

Alexandria is one of the best places in the world to eat Ful medames, a classic Egyptian dish made with cooked fava beans prepared with vegetable oil, cumin, and lemon.

A typical breakfast dish, often served with bread, hard-boiled eggs, and fresh vegetables, ful was traditionally prepared in enormous pots which cooked overnight in the fires used to heat the bath water of the city's many hammams or public baths.