Can You Guess Where These Beautiful Natural Places Are?


Take a careful look at the following images – do you recognize any of these beautiful natural places? Read the brief hints above the image, and good luck!

This place is part of an area which is as large as China or the United States. The weather is very hot, yet surprisingly, the temperature drops at night. Do you know where it is? 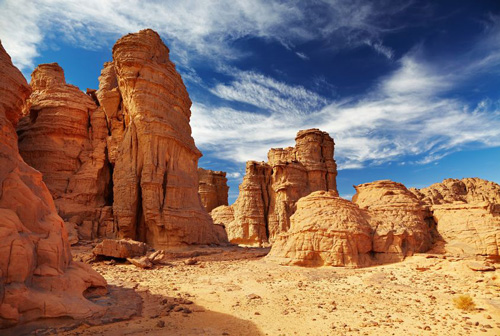 Spreading all across North Africa, Sahara is the largest hot desert in the world. Its borders are the Red Sea in the east, the Mediterranean Sea in the north, and the Atlantic Ocean in the west. In Arabic, sahara means "deserts".

People have lived on the more fertile edges of the Sahara for thousands of years. The desert used to be much wetter and, for this reason, richer in animal and plant life. Fossils and 12,000 years old rock art formations found in Tassili n'Ajjer serve as a proof.

Tassili n'Ajjer is in fact a large sandstone rock formation, composed of more than 300 arches, pillars, and steep cliffs. Several endangered plant species unique to the region can be found here.

It looks like a really cold place, yet it is situated in a warm, southern country. The place is particularly famous for its special animal visitors which come once a year. Do you have any clue where this place is? Located within the Los Glaciares National Park, Lake Argentino is the biggest freshwater lake in Argentina. Its waters flow to the Atlantic Ocean through a river, and are known for large glaciers.

This beautiful lake is located in the region of Patagonia, which comprises the entire southern section of the South American continent. Its name derives from the word patagón, first used Ferdinand Magellan, a Portuguese explorer, to describe the native people of that region.

Being near to the South Pole, Patagonia in fact has a very cold climate. That said, Patagonia is home to several types of penguins. The most common are the Magellanic, named after the same explorer who saw them there in 1520. They usually arrive at the Patagonian coast in September and stay until March to breed.

The cliffs surrounding the shallow blue waters make up this charming landscape, difficult to find anywhere else in the world. You can visit it in the summer, or in the winter - it will still be warm enough to swim. Can you guess where it is? Krabi is a true gem of Thailand. This province consists a long white sand coastline, a jungle, and more than 200 small islands. This place is warm all year long, although it is subject to the rainy season which lasts for six months.

Accessible only by boat, Railay is a small peninsula near the city of Krabi. The Railay beach is famous for the large cliffs which surround it. For a long time, these cliffs have been attracting adventurous rock climbers.

There are no roads, cars or city noises, so Railay is a very cut off location. Tourists can go to Railay to relax on the beach and go on rock climbing tours.

It looks like it is covered in snow, yet it is warm enough you could swim in one of the springs. Very close behind it, there are ruins of an ancient city. Where could that be? 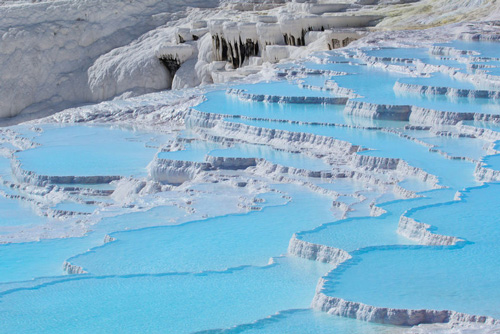 In Turkish, pammuk kale means "cotton castle", however, this purely white natural site is not made of cotton. From afar, Pamukkale looks like it is the only spot covered in snow in the entire region, but what makes it white is actually travertine, a mineral.

Natural pools with hot water are spread out all over Pamukkale. The underground volcanic activity keeps the water hot at all times. The visitors were once free to relax in these hot water springs, however, nearly all of them are now they are closed for bathing due to pollution.

The hill of Pammukale hides another secret – behind it, there are a well-preserved theater and other remnants of the ancient Greco-Roman city of Hierapolis.

Facing the ocean, these green cliffs add to the great beauty of the isolated region, and the country they are located in. This is one of the largest countries in the world, yet relatively few people live in it. Which one is it? The Canadian island of Newfoundland has many capes. St. Mary's Cape is known for its wildlife reserve, being home to one of the largest seabird colonies on the island. Tens of thousands of different kinds of birds can be found all over this small place.

Newfoundland, located on the southeastern edge of Canada, was first visited by an Icelandic Viking in the 11th century, and only discovered by European explorers in the late 15th century.

The island is also Britain's oldest colony, having been claimed by Sir Humphrey Gilbert in 1583. Today, native species like the Newfoundland beaver and black bear enjoy this wonderful island.