The City of Lights


The fourth-most populous city in Australia and the capital and largest city of the state of Western Australia, Perth is considered to be one of the world's best cities to live in, according to a range of different indicators of quality of life. With its successful business district, its proximity to natural beauty, and its location on the shores of the Indian Ocean, Perth is a growing destination for both trade and tourism.

Founded in 1829, the city was named after the city of the same name in Scotland, due to the influence of Sir George Murray, who was the Secretary of State for War and the Colonies for the United Kingdom at the time of Perth's founding and who was the Member of Parliament for the Scottish city. 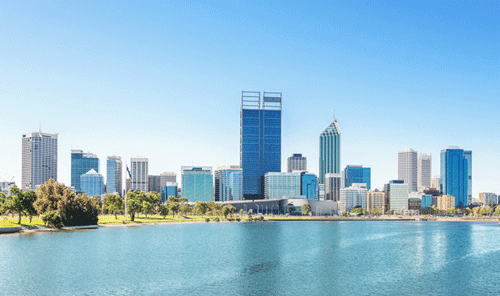 A Brief History of Perth

Located on the western edge of the central business district in Perth, King's Park spreads over 1,000 acres (4 square kilometers) and is home to over 324 species of plant as well as 80 bird species. Offering panoramic views of the Swan River and the nearby Darling Range mountains, the park is the most popular visitor destination in Western Australia, visited by over five million people each year.

Each September the park hosts Australia's largest wildflower show and exhibition, the King's Park Festival, as well as being the location of the State War Memorial, which is dedicated to the memories of all of those Western Australians who lost their lives fighting the First and Second World Wars. At the main entrance to the Park is the Edith Dircksey Cowan Memorial Clock, built in 1934 to commemorate the first woman elected to the Australian Parliament.

This set of 18 bells is housed in the Swan Bell Tower, a 271 foot (82.5 meter) copper and glass structure overlooking the Swan River.

One of the largest sets of functional change ringing bells in the world, twelve of the set are historic bells which once rang in the St Martin-in-the-Fields Church in London's Trafalgar Square, which were donated to the State of Western Australia as part of the celebrations of Australia's bicentenary (its two hundredth birthday) in 1988.

Since opening in 2000, the bell tower, which cost over 5.5 million Australian dollars to construct, has quickly become one of Perth's most iconic sights.

Officially known as the Cathedral of the Immaculate Conception of the Blessed Virgin Mary, St Mary's Cathedral is the main seat of the Roman Catholic Church in Perth. The church was built in three main phases, with the first phase completed in 1865 the introduction of a large new Perpendicular Gothic style begun in the 1920s.

After 70 years incomplete after building work was halted due to the Great Depression of the 1930s and the increasing costs of repairs, the cathedral was reopened after its extensive new renovations were completed in December 2009. The Cathedral is home to the oldest cathedral boys' choir in Australia, as well as housing the remains of Perth's first Bishop, John Brady.

Having hosted a range of local and regional cricket matches since the early 1890s, the ground became one of Australia's most beloved venues for international test cricket from 1970, with its pitch considered one of the quickest and bounciest in the world: making for especially exciting matches.

Although the WACA has been superseded by the new Perth Stadium as the largest cricket ground in the city, it is still used to host a range of different sporting, musical and cultural events every year, and has a large museum dedicated to the history of Australian cricket within its grounds which draws numerous visitors each year.

Perth is the perfect place to try one of Australia's most famous and beloved desserts, the Lamington. This sponge cake, coated in an outer layer of chocolate sauce and rolled in dried coconut flakes, is so popular that July 21st has been designated as National Lamington Day across Australia.

"Lamington Drives", where the cakes are made and sold in order to raise money for a range of different charitable causes, are a common feature of community life in Perth.