Thomas Jefferson is one of the most important people in American history. 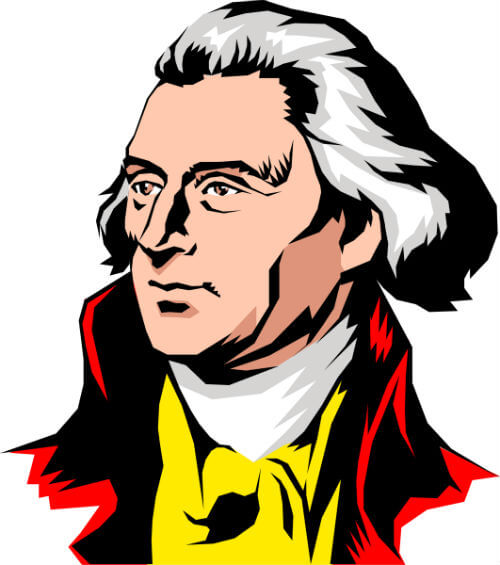 The law and beliefs in the United States are based on Jefferson’s ideas of equality and peace. "Equality" means that everyone is the same and no one is better than anyone else.

In 1776, Jefferson was asked to write the Declaration of Independence. This was a document that all the members of the Continental Congress would sign. It said that the American colonies wanted to be their own country and that they didn’t want to be ruled by England anymore.

The Declaration of Independence was signed on July 4, 1776. In 1783, the war between England and America ended and the United States became an independent country. President of the United States

Thomas Jefferson was elected to be the third president of the United States. He was president for 9 years from 1801 until 1809.

Thomas Jefferson was a very smart man who was very well educated. "Well educated" means that he went to school and learned a lot there. He had a huge library at his home in Virginia. He knew a lot about history, science, and architecture (buildings). Thomas Jefferson believed in equality, education, and fairness. Because of the very important role (part) he played in United States history, these ideas are written into the laws of United States and are important to every person living there.


a) everyone is the same

b) everyone is different

c) some people are better than others

d) some people are nicer than others


a) land that is ruled by itself

b) land that is ruled by another country

c) land that was won in a war

d) land that was lost in a war

1. What were two to Thomas Jefferson's beliefs that he wrote in the Declaration of Independence?

2. What topics did Jefferson know a lot about?

3. What did Jefferson do with many of his books?