In this lesson, we will look at many example sentences with semicolons (;). This is a punctuation mark that is often misunderstood. But it can be really useful for joining two related ideas together! 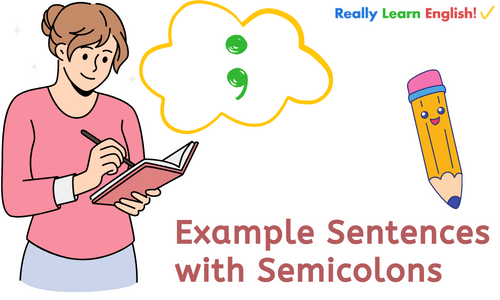 5) Examples of using semicolons with adverbs

What Is a Semicolon?

A semicolon ( ; ) is a punctuation mark that is used to join two independent clauses.

A clause is a group of words with a subject and a verb.

For example:
In the sentence, "Joe can't dance very well, but he sings beautifully" there are two clauses:

"But he sings beautifully" (subject: he, verb: sings)


Another example is the sentence "Despite the fact he tries very hard, Joe can't dance very well". This sentence also has two clauses:

"Despite the fact he tries very hard" (subject: he, verb: tries)


An independent clause is a group of words that has a subject and a verb and can stand alone as a complete sentence.

The dependent clause is called "dependent" because it is totally dependent on the rest of the sentence for people to understand it.

Nowadays writers mostly use semicolons for the following reasons:

- We need to invite: Kate, Jack, and Sue; Ashley, Tony, and David; the Smiths and their friends.
- Please bring: a pen, paper, and calculator; a laptop, mouse, and headphones.

- We can order: pizza, burgers, and fries; or chicken, tacos, and nachos.

- I have to pick up: groceries, laundry detergent, and cleaning supplies; a new dress for my sisters wedding; and my dry-cleaning.

- Joe was really excited; he had never been to a rock concert before.

- I tried my best; unfortunately, I still failed the test.

- She was determined to finish the project; she stayed late at the office every night.

- The day was hot and humid; it was the perfect weather for a swim.

- The roads will be icy; please take extra care when driving home.


The examples above show how semicolons can be used to join two closely related ideas. As you can see, they create a pause in the sentence, allowing for better flow and clarity.

- I really appreciate your help; thank you for doing this.

- John is a very good basketball coach; he has won many championships.

- Kevin is a very friendly guy; he always says hello to everyone he meets.

- Molly enjoys going to the beach; she loves to swim in the ocean.

Examples of using semicolons with adverbs:

- She had the opportunity to travel; however, she decided to stay home.

- He was very excited about the project; nevertheless, he decided to quit.

- She worked hard on the project; consequently, she got a good grade.

- She was very eager to start the job; nevertheless, she was afraid of failure.

- He was very committed to the project; therefore, he worked hard to complete it.

- They were both very happy with the result; nevertheless, they still disagreed on some points.
- She was very proud of her achievement; however, she knew there was still room for improvement.

- He was very disappointed with the result; nonetheless, he recognized that he needed to continue to work hard.

- They were not happy with the result; nonetheless, they recognized that it was a necessary evil.

- He was very grateful for the opportunity; nevertheless, he knew it was not the perfect job for him.

- She wanted to make sure she did the best job; accordingly, she put in the extra effort.

- She had worked hard on the project; similarly, she was not willing to settle for anything less than perfection.

- He wanted to make sure he gets the best product; hence, he carefully read all the instructions.

- It's not easy to make a decision; still, I think I made the right one.

Semicolons are often misunderstood and misused, but when used correctly they can make your sentences easier to understand. Overusing them, however, can lead to confusion and be distracting. So use them sparingly.

Which of the following sentences use a semicolon INCORRECTLY? Return from Example Sentences with Semicolons ( ; ) to Punctuation Marks in English (Rules and Examples)