How to Avoid Wordiness in Writing


"Brevity is the soul of wit," William Shakespeare wrote in his play Hamlet.
(Brevity means using few words to say something, soul means the most important part of something, and wit is the ability to say clever and amusing things.)

Writing brief and concise sentences is a true skill. Doing the opposite is what we call "wordiness". Wordiness is a common mistake many English learners make. Writers are wordy when they use too many words in a sentence or paragraph, many of which can be considered unnecessary or vague. 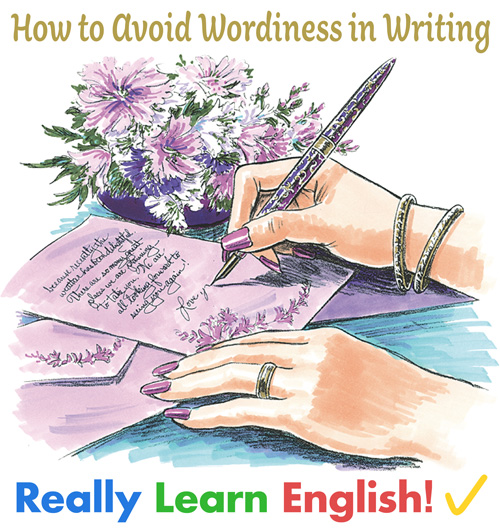 The following sentences can be considered wordy because they contain words we can take out without losing (or changing much) the main idea.

In addition, this hugely abstract and ambiguous concept we have been analyzing in the past three hours is known to have been discussed for the first time roughly around thirty years ago.

To be more precise, people of all ages are strongly advised to follow the instructions with much dedication and attention in order to ensure their own safety at all times.

These sentences are long and confusing. Once we remove the vague and useless words, it is much clearer and easier to understand.

The abstract and ambiguous concept we have analyzed was initially discussed around thirty years ago.

All people should follow the instructions to continuously ensure their safety.

Why Is Wordiness a Problem?

Being a wordy writer can be a huge problem because it shows you are unable to get straight to the point and state your arguments clearly. When your sentences are wordy, it takes the reader more time to understand your main idea. This can distract and frustrate readers. They may even stop reading your article.

For these reasons, every English learner should spot wordy sentences, and rewrite them so that each sentence is effective, concise, and easy to understand.

How can you detect wordiness in your writing?

To make sure you do not miss a wordy sentence, you need to look out for:

Certain words in the written English language are less needed than others, at least in most contexts. While it is essential that you use basic verbs as well as strong verbs and nouns, adverbs often do not bring any new meaning or context to the sentence.

That said, as rule number one, you should try to identify such adverbs. We call them "filler words" because they sound good and smart but are useless. If you can take out a filler words and nothing will change in the sentence, then you are advised to do so to decrease wordiness.

Some historians commonly believe that the two world wars were, in fact, one long war.

The adverb commonly prettifies the sentence; yet, it does not tell or show anything new. We already know that some (not all) historians hold a certain belief, so we do not need this adverb to tell us that this phenomenon is common among those who have such an opinion.

That is why we can rewrite it as:

Some historians believe that the two world wars were, in fact, one long war.

Other times, some words are redundant in a particular sentence or paragraph. This means that they may be a perfect fit in a different context, but in this case, they only reiterate the information other words already describe.

Sarah is such a hard-working, industrious person.

Hard-working and industrious are synonyms with no degree of difference in this example, so there is no point in using both of them.

Instead, we can write:

In other cases, redundant words and phrases do not have to appear in the same sentence. A writer can repeat the same point two or more times using different, yet similar phrases in different sentences. This not only adds to the word count, but gives an impression of a boring, poorly-organized piece, which is hard to engage with.

Yesterday's party was simply amazing. The party, which took place yesterday, lasted until the morning.

The first sentence tells us that the party happened yesterday, which is why reiterating the same piece of information in the second sentence is redundant.

We can rewrite these sentences as:

Yesterday's party was simply amazing. It lasted until the morning.

A qualifier is a word that describes another word.

Qualifiers such as very, quite, and really can also cause wordiness. Most of the time, these qualifiers either do not say much or can be replaced, together with the word they are qualifying, by another stronger word. The latter is especially true for weak adjectives.

The article you sent me was quite a difficult read.

It is not wrong to include the qualifier quite, but the sentence would still have the same meaning even if we took the qualifier out.

The article you sent me was a difficult read.

I am very tired today.

It would be more effective (and shorter) to simply say:

I am exhausted today.

Keep in mind that not all qualifiers should be instantly omitted to avoid wordiness. Sometimes using one of these qualifiers is essential to stress a particular verb or adjective.

Do you really mean it?

With the help of the qualifier really, this sentence suggests that the writer doubts whether the other person said something they believe is true or made an empty promise.

Quite a few people came to the lecture.

In this particular phrase, quite together with few makes the opposite of few (meaning that many people came to the lecture), which is why we should not omit it.

Next, linking phrases sometimes contain too many words, yet do the same job a simple preposition such as to could do. Whenever you need to decrease your word count, you should look for these linking phrases, because they can easily be replaced or cut short, making the article less wordy.

The rewritten sentences all contain fewer words, yet their meanings remain exactly the same.

Lastly, some long phrases and constructions are frequently used although they have much more concise equivalents. This means that to decrease wordiness, you should rewrite them in a more direct way.

It is easy to forget about these unnecessary constructions because we use them in the spoken language, too. As a general rule, you should look for phrases which contain what, that, who, why, and so forth.

Moreover, sentences containing or starting with "there is/there are" can typically be rewritten using fewer words.

In sum, reasons why a sentence or an entire article are considered wordy can vary. There is no exact and rigid set of rules to follow, but there are words and phrases you should be mindful of when editing your article, because they surely affect how wordy you are as a writer.

You should also note that writing in the passive voice or using progressive tenses (e.g. present perfect progressive or future progressive) adds extra words to your article. Feel free to take them out unless the stress truly is on how long an action lasted.

But: We have been searching for you for hours!