A Lesson for English Learners


What are the origins of Thanksgiving? Find out in this simple English lesson!
Thanksgiving is one of the most beloved holidays celebrated in the United States. It is a time for families and friends to gather, share a meal, and give thanks for all the blessings in their lives. (The word "blessings" means the good things in your life.)
Thanksgiving is celebrated on the fourth Thursday of every November. 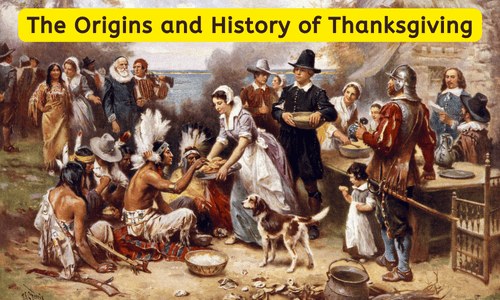 5) 200+ Years of Thanksgiving as an Unofficial Holiday

The origins of Thanksgiving can be traced back to the early 17th century when the Pilgrim Fathers came to America from England.

The Pilgrim Fathers (also called the Pilgrims) were a group of English people who left England in the 1600s. They were looking for a new place to live because they didn't like the way things were in England. They sailed to America on a ship called the Mayflower, and started a new colony there. They wanted to start a new life in America. The word "pilgrim" comes from the Latin word peregrinus, meaning "foreign".

A colony is a group of people from the same country living together in a new place. The Pilgrim Fathers decided to name their colony Plymouth because that was the city in England from which their ship (the Mayflower) had departed (left). The Pilgrims were full of hope for a fresh start. However, they quickly realized that they were ill-prepared (not ready) for the challenges ahead (in their future).

The weather was freezing, and their food supplies were running low. Many of them became ill.

Despite these difficulties, the Pilgrims persevered (continued and did not let the problems stop them). With the help of their Native American neighbors (the Wampanoag), they learned to grow food.

The Wampanoag is a group of people who originally lived that area of America. They were skilled at hunting and fishing. They also knew how to grow corn, beans, and squash.

The Wampanoag chief (leader) made a peace treaty (agreement) with the Pilgrims that lasted for 4 decades (1621-1641).
The Wampanoag were generous to the Pilgrims, teaching them important skills so that they could survive in the New World (newly discovered America, in relation to the Old World: Asia, Africa, and Europe).

The harvest is the food that farmers grow. In the fall of 1621, the harvest was good, which means the Pilgrims had plenty of food.

To celebrate their success, they organized a feast (a big meal) for about 50 Pilgrims.

The feast lasted for three days and included games, songs, and dancing. This celebration came to be known as the first American Thanksgiving.

Two years later, in 1623, the Pilgrims held their first religious Thanksgiving Day. After a two-month drought (a long time without rain) ended, the Pilgrims gave thanks to God for sending much-needed rain.

200+ Years of Thanksgiving as an Unofficial Holiday

For the next 238 years (from 1624 and 1862), from 1624 to 1862, Thanksgiving was celebrated primarily in the Northeast United States. The date varied from year to year and it was not an official nationwide holiday. Sometimes, it was not celebrated at all.

In 1863, the American Civil War (a war between the Northern and Southern US states) was raging (happening strongly). President Abraham Lincoln needed a way to unite (bring together) the country. Sarah Josepha Hale (1788–1879), a mother of five and a widow, was the first female editor of a magazine in the United States. She used her beautiful writing to promote the creation of Thanksgiving as an official holiday.
From 1846 till 1863 (17 years) she wrote letters to leading politicians, urging (strongly encouraging) them to declare the day of Thanksgiving a national holiday.
She was eventually successful in her mission, and in 1863, in the middle of the Civil War, President Abraham Lincoln signed into action "A National Day of Thanksgiving and Praise".

The word "thanksgiving" means to give thanks, show appreciation. "Praise" means to express admiration for achievements.

A famous quote by Sarah Josepha Hale, the "Mother of Thanksgiving":

"There is no impossibility to him who stands prepared to conquer every hazard. The fearful are the failing."

This means that people who are afraid of failing are the ones who usually end up failing. If we prepare ourselves for anything that life throws at us, and dont be afraid of danger, then there is nothing we cant accomplish.

Today, Thanksgiving Day continues to be celebrated in America as a way to give thanks and reflect on the good things in life. It is usually celebrated with a big family meal and activities such as football, parades, and Thanksgiving plays.

Abraham Lincoln: The 16th President of the United States, who declared Thanksgiving a national holiday in 1863.

Accomplish: To succeed in doing something.

American Civil War: A war between the Northern and Southern US states from 1861 to 1865.

Blessings: Good things that happen to us.

Chief: The leader of a tribe.

Civil War: A war between two sides of the same country.

Colony: A group of people who leave their country to settle in a new land.

Conquer: To achieve victory over something.
Depart: To leave a place.
Drought: A long period of time without rain.

Feast: A large meal, usually for a special occasion.

Giving thanks: Showing appreciation and kindness for something.

Harvest: The food that farmers grow.

Hazard: A risk or danger.
Ill-prepared: Not well prepared.
Impossibility: Something that cannot be done or achieved.
Ahead: In the future.

Mayflower: The ship that transported the Pilgrims to North America in 1620.

Mission: A goal that someone works hard to achieve.

Native Americans: The people who originally lived in North America.

New World: the newly discovered America, in relation to the "Old World", which was Asia, Africa, and Europe.
Passed away: a polite way to say that someone died.
Plymouth Colony: A colony of English settlers, founded in 1620 and located in modern-day Massachusetts (a state in Northeastern United States).

Persevere: To continue an activity or task despite difficulties.
Pilgrim Fathers (also called the Pilgrims): The people who first settled in the Plymouth Colony in New England.
Praise: To express admiration for achievements..

President: The leader of a country.

Reflect: To think deeply or carefully about something.

Sarah Josepha Hale: An important writer and editor, credited with the creation of Thanksgiving as an official holiday.

Settle: To start living in a new place.

Settlers: People who leave their homes to start living in a new place.

Thanksgiving: A holiday celebrated annually in the United States, to give thanks and reflect on lifes blessings.

Treaty: An agreement between two or more people or groups.

Tribe: A very large group of related families, who live together in a certain area.

Unite: To bring people together.
Urging: Strongly encouraging someone to do something.
Voyage: A long journey by sea or air.
Wampanoag: One of the tribes who originally lived in North America.

A Short Story Dialogue to Demonstrate Some of the Thanksgiving Vocabulary

Bob: "Lets give thanks for all of our blessings! Im so thankful to have such good friends in my life."

Samantha: "Agreed! We should all be thankful for the hard work that Sarah Josepha Hale went through to unite us and make Thanksgiving an official holiday."

John: "Indeed. We should also be thankful for the Wampanoag people, who taught the Pilgrim Fathers how to survive in the New World."

Bob: "And lets not forget Abraham Lincoln and his actions to make sure Thanksgiving was celebrated every year."

Samantha: "The American Civil War was raging at the time, but we persevered, and now we can celebrate this day every year."

John: "Lets all join hands and reflect on the true meaning of Thanksgiving." We hope this lesson has provided you with a deeper understanding of the origins and history of Thanksgiving.