Principle and principal are two commonly confused words in the English language. When do you use each one?

The two words look very similar and they even sound the same, but they mean very different things.

Principle is a noun that means a strongly held belief or a basic fact. It is often used to describe how good a person is. Someone with strong principles is usually seen as a good, moral person.

Principal can be a noun or an adjective.

As a noun, principal means a person in charge of a school.

As an adjective, principal means most important.

If you are using a noun that refers to a person, you always want to use principal.

A Story to Practice Principle vs. Principal

As principal of the school, Mrs. Howard's principal concern is that her students have good principles. She cares about other things like test scores, of course, but principles are principal for her.

Before she became the principal, Mrs. Howard worked as a teacher, where she taught lessons on different kinds of principles. She taught grammar and told her students they needed to learn the principles before they could understand more complicated rules.

Eventually, her lessons starting including other kinds of principles, like stealing is always wrong. These became her principal lessons and she started giving pop quizzes asking students what principles were principal to them.

Now that Mrs. Howard is the principal, she makes the students walk under a sign each morning that says, "What is your principal principle?" Sometimes she'll stop a student and ask him to name a principle that matters to him. If he doesn't have a good answer, the principal will give him her lecture on the principle of why principles are principal! 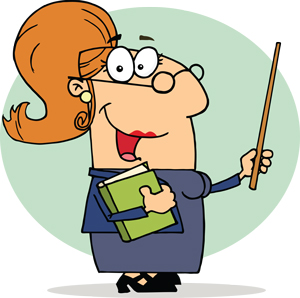 Return from Principle vs. Principal to Confusing Words